At 0438 Saturday October 22nd the tones dropped for a reported garage fire behind 235 Martsolf ave the Truck went en-route with 5, WVPD went on scene with heavy smoke. Truck 247 arrived and split up, started opening up and throwing ladders with Truck 3. Upon gaining access through the garage door they encountered about 6 feet hoarder conditions. The men operated for close to 2 hours before returning. Thank you to the residents across the street for the coffee and donuts! 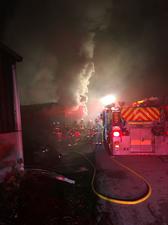 Busy Day on the hill

10/21/2016 - The morning started off with the Truck going out to McCandless for EVDT, shortly after the Engine ran an odor of gas outside on Park Place. Shortly after returning the box was dropped for "the garage and office on fire across from 1825 Teal Trace". The Engine and Truck were on scene with 8 within 2 minutes to find a fire in the walls and held it 2&2. The Engine returned to service and set off to the fire prevention day in West View. The Truck then ran an upgraded gas leak in Reserve units had a gas line struck and gas in several structures. The truck arrived and assisted with evacuation and metering. In addition to this the volunteers ran 4 medicals.

8/9/16: After the company meeting, the Engine Company was alerted along with EMS Station 210 and 312 Rescue 40 for a crash with injuries on Ross Park Mall Drive. Engine 247 was on the road in seconds, and arrived with Ross PD and RPM Security with two vehicles head-on, with one on the ground. The Engine Company split its crew, initiating patient care and handling containment. Medic 214-1 and Squad 217-5 arrived and packaged the patient for transport to an area trauma center. The Engine cleared shortly after.

8/7/16: Late in the afternoon Truck 247 was alerted along with other area companies for a garage on fire on Grove Avenue in 252s district. Truck 247 with a crew of 4 arrived as the first due truck and immediately went to work throwing ground ladders, checking for extension, and opening up the roof. The Truck returned within the hour. 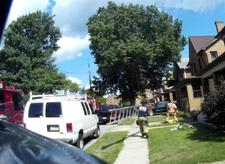 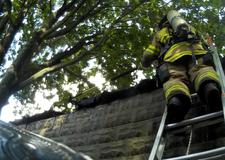 At 1205 on Friday the box was struck for an odor of smoke in the building at the Ross Township Police Station. The truck arrived first with nothing evident and began investigation. The engine arrived shortly behind, secured a water supply and assumed command. The truck crew had an odor in one of the police conference rooms. Upon further investigation with crews from 251 and 297, completely tearing apart an HVAC unit, the source was finally narrowed down to a belt in the HVAC unit. 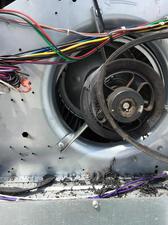 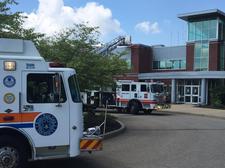 Squad Gets Life Save

8/6/16: On its second of 5 calls for the day, QRS 247 was dispatched for a male who fell outside of the Town North Towers. Squad 247 (FF Combs, FF Schmidt) responded to find one on the ground outside still in a wheelchair. Just as the medic unit was pulling up, the patient went into cardiac arrest. The Squad crew immediately began resuscitation efforts along with the Medics. After one defibrillation they regained pulses, and the patient was transported to AGH with one from the Squad aboard. The patient survived and is to be discharged from the hospital shortly. Great work gentlemen!

This is the 6th life save for Berkeley Hills Fire Company for 2016. A "Life Save" is when a patient goes into cardiac or respiratory arrest, and through the efforts of our QRS crew, sometimes even before the arrival of the medic unit, the patient is resuscitated with spontaneous respirations and heart beat.

Berkeley Hills Fire Company provides QRS (Quick Response Service), responding on all higher priority EMS calls in the area. With EMRs (Emergency Medical Responders), EMTs (Emergency Medical Technicians), and Paramedics, we provide medical care prior to the arrival of the ambulance, which can sometimes be delayed with the heavy traffic congestion on McKnight Road. In 2015, BHFC ran 776 QRS calls.